Your basket is empty
Other Instruments & Accessories
:
Strings & Folk
>
Accessories 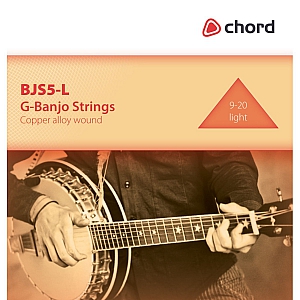 Mouse over image above to zoom, click to enlarge. Actual item may vary slighty from image.

Chord G-banjo Strings. A set of 5 steel strings for a G-banjo. Coated copper alloy wound. The banjo is a four, five- or six-stringed instrument with a thin membrane stretched over a frame or cavity as a resonator. This is called the head. The membrane, or head, is typically made of plastic although animal skin is still occasionally, but rarely used. The frame is typically circular. Early forms of the instrument were fashioned by Africans in America and adapted from African instruments of similar design.

The banjo is frequently associated with country, folk, Irish traditional, and country music. Historically, the banjo occupied a central place in African American traditional music. Then it became popular in the minstrel shows of the 19th century. The banjo, with the fiddle; is a mainstay of American old-time music. It is also very frequently used in Traditional (“Trad”) Jazz.

The modern five-string banjo is a variation on Sweeney’s original design. The fifth string is usually the same gauge as the first, but starts from the fifth fret, three quarters the length of the other strings. This lets the string be tuned to a higher open pitch than possible for the full-length strings.

enquire about this item
(15 in stock)